After another party in the house to get me back my Cuba groove, yet again the boys were on holiday (do they ever work these French teachers?).  I wanted to get out of Havana with the children on some mini-adventure not too far away.  We have recently gone from a no technology household to one that now has an XBOX and two ipads, so I have been dealing with the challenge of how to deal with their new found obsessions, Saskia being the worst.  Mummy darling can I have your ipad please, cocking her head to one side and smiling sweetly until I say no and then she throws herself to the floor in a tragic fashion and wails I want your ipad for as long as I let her.

Mariel is a place around 30 miles away.  Amongst other things,  it is the most industrialised town in Cuba and nearly the most polluted.  I was imagining something like a tropical version of Middlesbrough or Sunderland, the places that inspired Ridley Scott in Bladerunner. 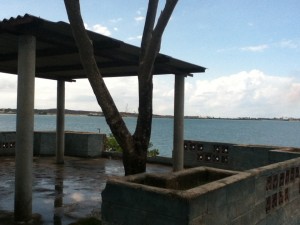 Also Mariel is now rumored to be the location of the next biggest port in Cuba, apparently a Brazilian investment.  I decided to go and investigate with the 3 children in tow.

Since I got back from New York my car has been off the road and we are still waiting for the parts. Rafa has rented me a little Kia Picanto, which the children are absolutely delighted with.  You’d think it was an E type Jaguar the way they are acting and spend all their time spotting others on the road.  And there are many, believe me, so this little pastime has become a little tiresome.  So off we went in our little rental car.  As we set off , the heavens opened and I began to think what am I doing heading off to the Cuban equivalent of Port Talbot in the pouring rain, but the children still seemed up for it so we ventured on.

A quick look in Lonely Planet confirmed my opinion that this was definitely not a tourist destination, which was what I was looking for.  How boring to just go to the places on the tourist trail.

Saskia was convinced that we were going to see some nice woman called Mariel so was very confused when we got there.  Where is Mariel? she kept saying.  This is Mariel, I said cheerfully.  The sun had come out and the place was not looking so bad, considering that its claim to fame was being the most unattractive town in Cuba.  She was sleepy from the car and very grumpy and could not get her head around it.  NO we’re IN Mariel I kept repeating to no avail.  We went looking for a new port under construction but found nothing that looked as though it was new or being built.  In the distance was a huge castellated mansion on the hill, looking down on everything.   I suppose it belonged to the rich industrialist patriarch pre-revolution days.  Now it is said to be a naval academy.

After Moa in Holguin Provice, Mariel is Cuba’s most heavily polluted town.  The filthy cement factory looks like something from another century.  But you know despite all this Mariel was not such a bad looking place.  I failed to find anything resembling a bar or café for us to hang out in, so we found a road which headed up to the mysterious looking castle  on the hillside.  As we drove up there we saw that there had been an enormous stairway to the main doors made up of very shallow steps and looking like something you could imagine Cinderella running down and loosing her slipper.  The stairs were now all falling down and the building looked as though it could too.  The boys ran on ahead and I stayed at the bottom watching them with Saskia, thinking I should probably stop them but couldn’t blame them for wanting to explore.  They got about 3 quarters of the way up before some militares appeared and told them to get down.  This was all well and good until one of them decided to take a pee right in front of them that even I could see right at the bottom of the hill.  Don’t do peepee in front of my kids I shouted indignantly up the long and steep staircase.  I bet they were thinking what the hell is this crazy blonde woman doing with her huge (for Cuba) family and her red plated rental car.  She must be lost or bonkers.

All the cars in Cuba have different colour plates so everyone knows exactly who you are.  I normally have orange ones which signifies joint ventures, now I have a rental car which just means dumb tourist.  We stopped on the street to say hello to some kids as we usually enjoy a bit of a chatter in the calle and the boys make new friends really quickly once the locals discover that they talk just like them.  One of them was so lippy that we didn’t stay for long.  He was cackling and asking us for chicle, chewing gum.  I told him that we weren’t tourists and he shouldn’t be asking for chicle.  He retorted by grabbing his crotch in a Michael Jackson type fashion.  I was a little bit horrified at seeing this brash little 7 year old acting in such a vulgar fashion so we pressed on and got lost on the estate next to the factory before heading home.

Mariel boatlift was the biggest exodus the island had ever seen and took place in the summer of 1980, while Carter was still the president, so prior to the days of the genocidal, maniacal Reagan.  A Cuban dissident had driven into the Peruvian Embassy in Havana, the Peruvians refused to give him and his mates back to Fidel and he, in a rare little strop, declared the gates open and thereby ushered in what was known as the Mariel Boatlift.  On April 9th 1980 he declared the port of Mariel open to any of those who wanted to leave and Miami Cubans organised a flotilla of boats to pick up Cubans.  Fidel also used this opportunity to get rid of a few undesirables from the prisons and loony bins.  Some of them never were granted asylum but in Brian de Palma’s movie Scarface a Marielito cocaine-addict, Tony Montana famously depicted by Al Pacino, was let out of Cuban jail to run amok in Miami.  I saw a few Tony Montana faces in Mariel but they didn’t look as though they wanted to run amok!