I spent a few tense days last week, when it appeared that this blog had disappeared into cyberspace.  I couldn’t find my website and I couldn’t get into the website of any of my host or domain suppliers to update information.  In the end in desperation on Friday night I went to a friend’s house where they have satelite and managed to get onto my site only to see that there was nothing there but a page saying that if you want to buy this domain name go to this link. What!  They’ve disolved me and are selling my name to any Tom Dick or Harry.

All that time I spent writing and although I had some copies and could ask faithful readers to email me back the ones I couldn’t find, the task of collating and getting everything back, especially here in Cuba, where being online is about the most expensive and difficult thing you can do, seemed an insurmountable and desperate task.

The film school is being asked to pay a monthly fee of 11,000 cuc ($) for their internet serivce which is much better than the dial up in my house but a long way off what you folk in the rest of the world are used to.  This is a ridiculous amount to pay and we are still struggling to negotiate something more palatable.  In the meantime we are at the mercy of whatever speed they seem to feel like giving us on whatever said day.

This is the reality of Cuba and although I do not like to criticise when I write about Cuba, I really feel that this futile refusal of a basic human right has to stop and I hope one day before we are off this island.  Meanwhile my children are not allowed to go online, I cannot download them kindle books from their grandparents or music for me and I live with the stress of a clock ticking on my online life.  Hence that this blog and facebook are about as much as I can manage.  And the rumours are that the broad band cable is already working ………… so why so afraid to give the people what they want?

If you ask any young person in Cuba what they would like to change here, the first comment is always undoubtedly THE INTERNET, in fact the almost shout it in unison, as if, what a daft question!  Those of you who have been reading me for a while will remember my fear before I came.  Imagine a world where there is little connectivity,no wifi, no connected iphones or ipads.  I began to dream of an ADSL connection but that requires a letter from the Minister of Culture which could take months and will leave us with a monthly bill of $600 which I would feel slightly guilty about.  That’s a flight for god sake!

Here in Cuba the lines of the Stereo MCs (old favourite of mine) often ring in my head.

Anyway I tucked into the wine in my moment of grief, and had great fun at the first British Embassy pub quiz trying to forget about it, and then woke up the next day feeling even more tragic.  And remembering how my new Pub Quiz friend Kester had told me that he read my blog and thought it was really funny.  Alas no more I thought and I think I am about to lose my sense of humour big time.

The next day a lunch with friends in a beautiful restaurant with botantical gardens, I kept my misery to myself.  By Sunday morning before Nico’s Birthday party I decided to make an international phonecall to see where my blog was and my 2 and a half years of writing ……….

Needless to say I got it back but still a mystery as to what happened, as everybody I spoke to claimed to have not messed with it.  Was I hacked by some malignant force?  I had received a couple of nasty comments lately from some old stalking acquaintance who is somewhat short of a few marbles but with many technical skills.  But maybe that was coincidental?   Not much time to write today so I am celebrating by managing to post some photos although for some reason I don’t seem to be able to chose which ones so here is a very random selection of my nippers …………. 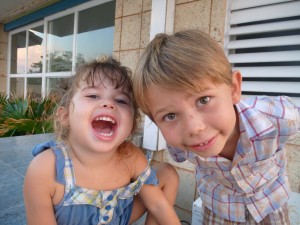 I know, I know ………. I well and truly fell off my blogging wagon.  But after a long hot summer with 3 children under 8, a certain composure has finally re-entered my house this morning (can a house be composed?  not sure).  I am alone at my computer and I have managed to get on line and there is no child screaming up the stairs for me or trying to climb on to my lap.

One thing that I was thinking the other day, as I was trying to come up with my next blog, and thinking that it better be good, because if I did have any readers I am sure they have all forgotten about me by now.  Anyway I was thinking that really I need to write posts every day as Cuba is like one great big telenovela (soap opera) and you just have to learn to roll with the good and the bad like a true Cuban.  Also Rafa’s life at the film school would be worthy of a good drama series and he doesn’t have chance to tell me the half of it.  I know I have not worked as an occupational psychologist now for some years but I feel as though I am.  Also I now manage 10 people in my house which is akin to a small business venture.

Also I had a few moments this summer when I really did not want to be in Cuba anymore which was not a good feeling as I probably have at least another 2 or 3 years to go!  So I had to shake that feeling and get back my Cuba groove.  The Olympic parties also made me feel terribly homesick for everything that I love about my country: great music, sense of humour, fighting spirit, throwing a good party.  I wanted to be there on the back of the Rolls Royce with Jessie J spinning around the Olympic Stadium …….. and no stealing Cubans.

Yes you guessed it, the main reason I have been feeling down is that the stealing has carried on, or at least the discoveries of more missing things in the house has only just stopped.  The thefts really bothered me and I had to work at being philosophical and think ….. its only money and we are all healthy and I have 3 wonderful children and a noble hard working husband who loves me.  But at one point it didn’t seem to matter how much hard cash Rafa was earning it just kept disappearing.  You need to bear in mind that Cuba is a cash culture and we are paid in cash and all our purchases are in cash.  Prior to this, I was a girl who lived on plastic, and the whole thing of stashing money and moving my hiding places was a new game that I did not do so well it appears!

We are now the proud owners of a safe with a roundy roundy twiddly knob with our secret access code like something out of another century.  I have until today been reluctant to learn how to open it which is beginning to slightly irritate Rafa.  I am not quite sure why I feel reluctant, maybe it is because I feel like an idiot that all these thefts have happened under my nose by people that I thought I could trust and I don’t want to be responsible for maybe not closing the safe properly or losing my little piece of paper with our secret code.

Rafa and I spent the summer like two amateur sleuths trying to piece together when we last saw things and who could have possibly been inside the house to have got their hands on our stuff which pretty much all disappeared from upstairs (although the cook did a good job of removing a few things from my kitchen).

It was awful because some of the people in my life who are entirely trustworthy, I had to mentally put them through the process of being under suspicion, especially as I felt that my ability to know what people were capable of in Cuba was evidently poor and I had to get with it and stop trusting people.  This is not my natural state.  You’re talking to the girl who had a baby (and then two more) with a man she hardly knew ……but trusted, and then proceeded to follow him to two quite tricky countries.

Anyway, we had to fire another couple of people and re-organise the house so that the people who I have always trusted are working for me more and have had a big pay rise.  It has taken me a lot of time to find a new nanny as the whole thing of letting another person into my house has been difficult.  Marylin started yesterday so lets see …….

Anyway this week I decided that I had to believe that the people around me are all good and our bad luck has stopped and look to the future.  And stop torturing myself with images of strangers handling and stroking my possessions and cackling to themselves at their good fortune to come across me!

Everybody is back from the summer break.  The party season is upon us once more and I have already met a handful of new friends.  We kicked off with the Brazil party in the Beach Club next to our house (Club Havana).

I still feel frustrated about my inability to get out of the house and do things for myself but I suppose every mother of 3 young children feels like that and not every mother is lucky enough to be living in such a beautiful house in front of the sea where everybody wants to come and chat whilst listening to the waves.

Also our new fairy godfather Santiago is sorting me out better internet connection so I don’t have to spend half and hour getting on line and the rest of the time worrying about the minutes ticking by on my dial up but knowing that to hop on and off line could mean another half an hour ………..  Soon I will have internet access from the film school and I can be on 24/7 and read some newspapers and maybe even download music.

I wanted to say a big thank you to all the people that have sent me and brought me presents ……. clothes, cheese, Vanish, toys, Nutella, tortillas…………   And also a big thanks to all my friends here in Cuba who have listened patiently to my tales of thieving woe.

So I will endeavour to catch you up on the events of the summer over the next few days and fill in the gaps of this log book blog book.

Our first graduation at the Film school and the emotions and all night party.

Juju’s visit.  Our wonderful nanny from Guatemala gets on her first plane to come and holiday with us for 2 weeks.

Our holiday trip to Cayo Santa Maria 5 hours drive away.

This week we have another party in the Mexican embassy (looking forward to the food!), and a party to welcome the new Guatemalan ambassador, and then we are throwing our first party of the season in our house with all the new people who have arrived at the film school ……….. but I shall be writing again I hope!