Easter arrived in Cuba.  After 8 years of dealing with Semana Santa in Antigua I am rather relieved that Easter like Christmas is not such a big deal, although I am sure my children don’t agree.  Luckily my German friend Katharina always organises a wonderfully tasteful German Easter with an egg hunt in her garden for the children and Easter bread very similar to hot cross buns. 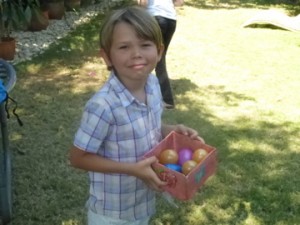 Anyway, Good Friday had been announced as a holiday here in Cuba but typically no mention of why or for what reason the whole of the country was being given a day off.  The French school, which doesn’t acknowledge religious festivals did a sneaky Monday holiday.  I totally forgot and turned up at the circulo with Saskia on Friday, realising pretty fast when there was no sign of anybody.  After all the chilly weather Good Friday was a typical hot steamy day.

The night before some militares from our neighbouring beach club had stupidly set fire to some rubbish at the end of our road, for no particular reason other than to piss off everybody in the neighbourhood, as far as I could tell.  It was too far for us to reach with the hosepipe so we tried to chuck buckets of water but by the time we managed to put out the plastic the flames has spread inside the trunk of our beautiful seaside spruce which marks the end of our road.  I had grown very fond of the tree not just because it was tall and beautiful but it was also symbolic.  The boys are not allowed to cycle or venture past it alone.  It marks the limit of the dogs territory and the gang of gangster male dogs don’t often venture past it.  If cars drive past it towards our house we know they are lost or looking for trouble!

Anyway most of Good Friday was spent with a bunch of around 20 guys, sent by the local council hanging around at the end of my road watching one guy hack the tree to bits with a chainsaw on the end of a large crane.  Every time I walked past to get into the car and pick the boys or take them to fencing, with Saskia in tow with her little mantra poor tree Mummy , pobrecito, I had to take the usual chatback you get from workers who are not working.  Enquiries of my nationality, my marital status (rather obvious I thought) amongst the other usual repartee.  They wanted me to bring them all refrescos (soft drinks).  I retorted that there was only one guy working and he was not making a very nice job of hacking my tree to death, so I wasn’t feeling very well disposed to waiting on them all like a 1950’s wife.  Finally around 4pm they had finished their work leaving an ugly hacked stump and branches and debris all over the road.  I managed to just about drive through it later.  We had already planned a bonfire for Saturday night but now we had even more reason.

Friday night we all went to the film school.  A friend was having a Birthday party and we thought it would be fun to hang out and chat with staff and students.  It had been a pretty intense couple of weeks for everybody and thesis time is arriving so nerves are getting frayed.  We took the nanny so we could actually stay up late, not always a good idea with 3 children.

We made it back to Havana for lunch the next day and poor Rafa had to rush off to another film meeting and festival in Havana.  I sat and watched Les Miserables with the boys and Saskia.  What a boring musical, not one good track if you ask me.  I don’t know how it had such a long run in London’s West End.  Paulo with typical endurance was the only one to stay awake or interested.  He watched it to the bitter end, bless him!

We were all ready to sit staring at the bonfire by 7pm and Rafa and the boys helped build it.  We had new fast-burning spruce branches to throw on and I got well into it like a seasoned pyromaniac, at one point hurting my wrist as I over enthusiastically snapped branches but never-the-less carrying on like the crazy fire starter I realise I am.  (secretly I can’t wait for our next one, I don’t care about the children!)  Anyway I didn’t think too much about my injury but ended up in the hospital by Tuesday afternoon having an X ray but luckily no fractures.  We went out to a party on Tuesday night and after a couple of glasses of wine, I thought oh its nothing and began to use it again.  Later that night I could hardly sleep and was almost in tears, wailing …. this is worse than childbirth!  The next day I used all the Cuban remedies for inflammation.  A compress of grated malanga (a root vegetable very common here) and some strange leaf, the name I can’t remember.  Today I am a new woman although my hand still looks suspiciously as though it has had a botox treatment.

This weekend is Saskia’s Birthday and the little Diva has been talking about it for months so we are all getting ready for the big event.  She has many adult admirers so it is growing into quite a big party for all of us!

New York preparations going really well.  We have 4 nights and it is going to be non-stop.  I am really looking forward to it.  I haven’t been to New York for around 15 years, and have generally got on with New Yorkers.  I like their straight talking attitude, and New York is almost as cosmopolitan as my dearest London.  We have lots of meeting with interesting people and film schools and yes I am going to power shop like a Cubanita!